Ok, So I still don't have my Laptop back from being repaired but Today is very exciting as we are Hosting the Olympic Torch (I must Blog about it!).
Now this blog is not a Tourist Blog by any means but today and over the next few Weeks I thought I would Share Some 'Must Sees' in my beautiful City. I thought I may as well try and promote Cardiff seeing as the 'London' Olympics are on this year.

The Olympic Rings outside the City Hall,
Picture Courtesy of WalesOnline.co.uk

Wales is also hosting the London 2012 Festival, and will be taking part in the record Breaking attempt for the largest Bollywood Dance performance. 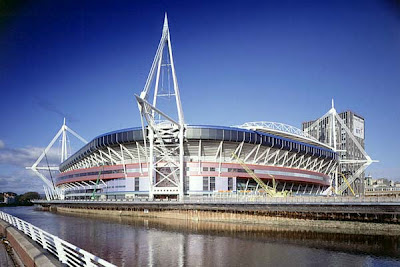 The Millennium Stadium in All it's Glory.
Image courtesy of www.rugbydata.com

This Stadium is a Must see!! It's magnificent and I feel really privileged to call it mine! The city also Generates an electric atmosphere whenever there is a match day, So I'm looking forward to the day the games commence, It's wonderful.
Not many Stadiums in the world are like this one. What makes this stadium magnificent is the Roof! Yes, my friends it can open and close whatever the weather. It's also a venue for Music concerts, which are unbelievable! Trust me I've been to see one. 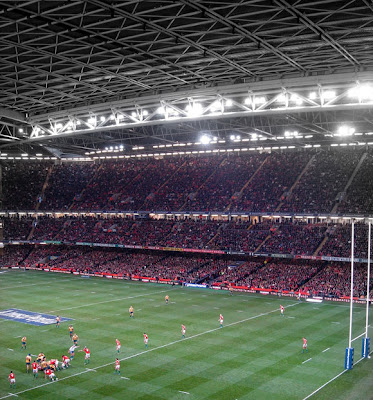 Inside the Stadium at A Wales Rugby match,
Image Courtesy of www.rugbydata.com

The stadium has a capacity of about 75,000 people and is situated in the very centre of Cardiff City. It also has a river flowing next to it, the River Taff, sometimes you can see the local Rowing clubs practising in it.

It's been a while since I posted but I've had a few problems this month. Unfortunately my laptop has had to go in for repair so I Haven't been able to catalogue any of my findings. I will hopefully get it back soon to carry on posting!
Posted by Leanne at 21:36 No comments:

Leanne
Hello, I am a UK based textile designer and this blog is for myself to share anything and everything that is inspiring me, It's where I can collate ideas, images, thoughts and passions and hopefully they will inspire you too.

View my complete profile
Please feel free to leave Comments, as i'd love to hear what you think.

Please do not copy anything on this Blog, If you are interested in using anything please contact me first. lcarpentier@hotmail.co.uk

Why not take a look at my shop on Etsy?